You Are Here: Virtual Disaster 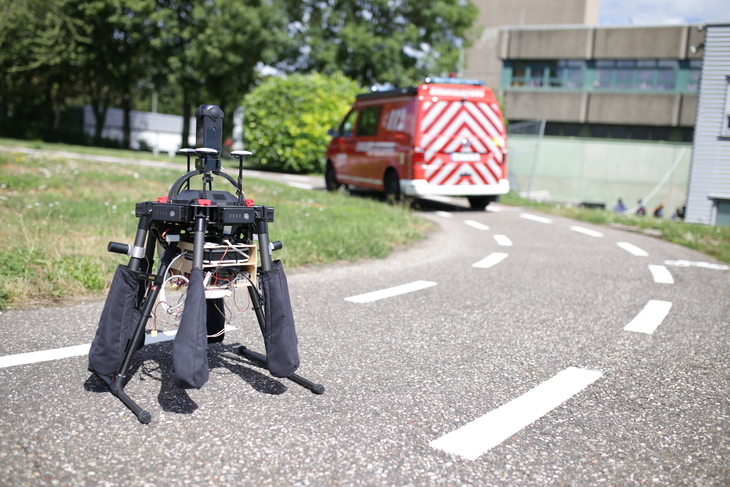 The poster provides a further overview of the VirtualDisaster project.

Major damage situations, such as fire events or a mass casualty of injured people, always confrontate management and rescue teams with special challenges. Initially, an overview of the situation is lacking, and many find themselves in a so-called "tunnel view".

Studies have shown that pre-planned processes and algorithms are often misused or ignored. This may, for example, result in a delay in the rescue and care of injured persons. It is often the first overview missing from the task forces to get an idea of the lack of resources and available potential just in time.

The aim of this project is to involve a tele-mission management similar to the model of the "Aachener Telenotarzt" in the scene. With the use of early arriving drones, a three dimensional virtual image of the application area should be taken and beeing provided to the tele-mission management. At the same time, individual drones can be instructed to land at a point of interest and transmit 360° live footage.

A virtual image of the operational situation saves valuable time. Managers can get an idea of ??the extent of damage and medical treatment needed before they arrive at the job site. Field forces can start promptly with a prioritized supply. This inevitably leads to an acceleration and optimization of patient care.

Tasks of the FSD

The Institute of Flight System Dynamics, FSD for short, will take care of the tasks related to the used aircraft within the project. First of all, this includes the development and implementation of a high-precision navigation solution, which is necessary for the creation of a 3D model with sensor data taken from the air. Furthermore, an algorithm for automated landing site detection in difficult terrain will be developed and implemented. Also, the operating processes for the use of multiple aircraft in the common airspace are dealt with.