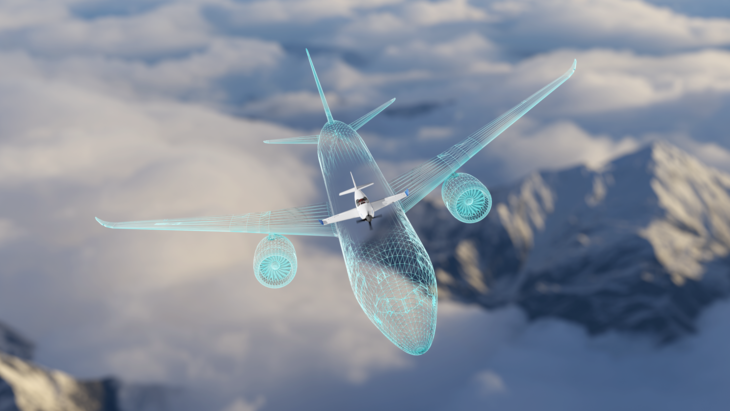 Today's pilot training systems and training aircraft map the aeronautical properties of the target platforms for which training is to take place, for example a passenger aircraft or (business) jets, only in the area of similar avionics or, in individual cases, the engine behavior.

The goal of the LuFo research project ADEPT-23 is to expand the range of applications of a 2-seat turboprop training aircraft and the associated stationary flight simulator by developing new types of training options and functions.

The basis for this is the development of a digital fly-by-wire (FbW) flight control that acts in parallel on the mechanical control. In combination with active digital input devices, the FbW flight control should ensure operation in the full maneuver envelope and in all flight positions. The developed flight control system enables software functions for the implementation of modern flight control laws and the mapping of significantly different flight performances, flight characteristics and operating characteristics of various reference aircraft. It thus enables the implementation of new types of training scenarios in flight, which previously could only be trained on more expensive jet aircraft types or only on the target aircraft type.

The following settings are within the scope of the F&E project:

Tasks of the Institute for Flight System Dynamics (FSD):

The Institute for Flight System Dynamics is working on the development of flight control algorithms in the ADEPT-23 project for mapping the flight characteristics of the target platforms on the agile training aircraft.

For this purpose, a flight-mechanical model of the two-seat base aircraft is first created and the control behavior is inverted. By inverting the control behavior, there is the possibility of controlling the aircraft not by direct control variable specifications, but by specifying target flight status curves. With the help of an additional flight-mechanical model of the target platform, it is now possible to interpret the pilot's control inputs as inputs into the control of the target platform, to calculate the resulting flight status curves, to fly them with the training aircraft and thus to impress the flight characteristics of the target platform on the training aircraft.

In addition to developing algorithms and models, the FSD oversees the tests and the integration of the software into the training aircraft and the simulator. Furthermore, the FSD supports the project partners in the planning, implementation and evaluation of the flight tests.