You Are Here: Flight Systems

In order to successfully cope with every task in the various projects of the FSD, different aircrafts are used for different tasks. Together with partners, the FSD has specialized in so-called tilt-wing aircraft, which are particularly characterized by their flexible use. The tilt-wing configuration enables vertical take-off and landing as well as hovering flights, which can be tactically important during operations.

The TW-Neo flight system was developed in close cooperation with our partner flyXdrive GmbH. It is the latest generation of tilt-wing aircraft that is used at the FSD. The TW-Neo flies with an autopilot system specially developed for this aircraft and is able to fly highly automated missions. It consists largely of lightweight fiber composites to optimize flight performance. The special ability to use only the tail motor in fast forward flight enables the TW-Neo to fly efficiently. The propellers on the wing fold in and reduce air resistance. The TW-Neo is designed for transport over long distances as well as search missions over long periods without stopping.

The TW-Neo has a wingspan of almost two meters and a length of 1.4 meters. With the maximum take-off weight of around 8kg, payloads for different areas of use can be attached both in the nose and on the belly of the aircraft. For example, there is space for different cameras in the interchangeable nose of the TW-Neos. In the Vision project, a combined IR and optical camera, which can be seen on the graphic shown on the right, can be used to automatically create a picture of the situation of deployment locations. This helps the emergency services on site to be able to assess danger situations in the operational area.

In projects such as FlutNetz, the transport of urgent goods, such as medicines, is made possible in a fetch nose. The flight system is used in many current and future projects of the FSD.

The Maverix flight system was originally developed at the FSD as part of a competition called IMAV. It is particularly characterized by its flexible application options, which is why it has mainly been used for the development of flight systems in recent years. For example, newly developed software can be quickly tested on Maverix before it is implemented at Neo. In addition, various other tests are carried out on the aircraft or modules for the flight systems at Maverix. The aircraft flies with specially developed flight control technology and can also fly fully automated missions.

With a wingspan of 1.5 m and a length of 1 m, Maverix has smaller dimensions than NEO, but can still carry large payloads and fly reliably on missions such as border flights. Maverix has so far been made of light wood and uses foil covered wings to have the lowest possible take-off weight. As with the Neo flight system, Maverix has three propellers for vertical take-off and landing, but the two propellers mounted on the wing for fixed-wing flight.

Maverix is ​​characterized by its very simple usability. After each flight, Maverix usually lands spectacularly on the roof of the mobile ground station. 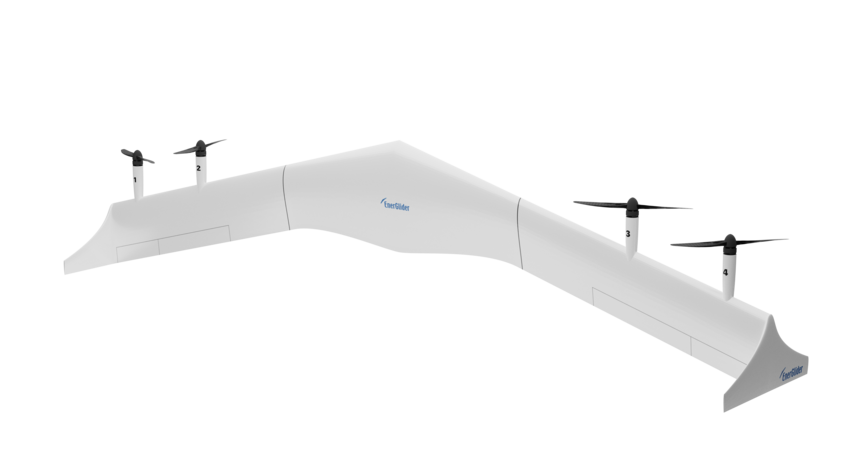 In the Energlider project, research is being carried out on so-called aircraft wind turbines. Aircraft should fly in the wind on ropes tied to the ground and harvest the energy from high-altitude winds. In order to gain as much energy as possible, these flight systems have to achieve high lift forces with relatively low aerodynamic drag. For this reason, the EnerGlider project relies on a flying system that consists of a high lift to drag ratio with a flying wing configuration. Such a flying wing configuration differs from the other presented flight systems essentially in that a fuselage, as well as a horizontal and vertical stabilizer are dispensed with. The flight system essentially consists of a swept wing. In order to ensure sufficient controllability around all spatial axes, the flight system has two rudders on each side of the wing.

Another special feature of the EnerGlider project is that the flight system should take off and land vertically independently. To make this possible, two drives are also provided on each wing. If the flight system has switched to a rope-bound flight after take-off, these drives can be switched off and the propellers folded in to keep the aerodynamic drag as low as possible. For a landing, the propellers fold out and the drives are switched on again accordingly.

In order to guarantee the safe operation of such a flight system in an aircraft wind power plant, a high degree of automation is required. The development of appropriate controllers and the commissioning of the flight system as such and integrated as an aircraft wind turbine is an essential part of the work at the Institute for Flight System Dynamics.